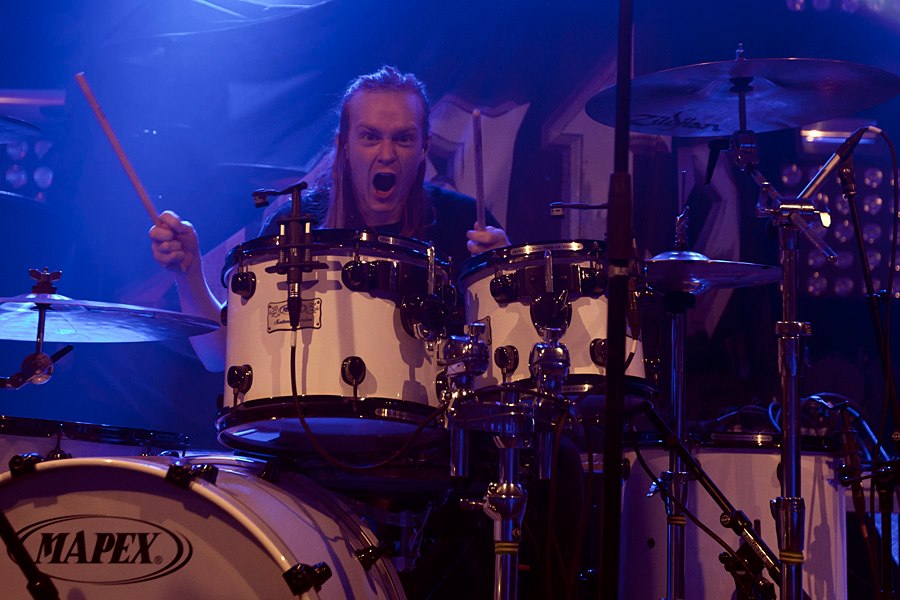 For some reason I never wanted to play double bass. I think maybe the limitation of having only one pedal made me more creative. Also most modern rock drummers play a lot of double bass and I kind of wanted to try to stand out.

Of course in Dynazty the amount of bass drum notes increased drastically when writing the fourth album, so I had to come up with an idea to be able to play the music. I added a gong bass drum to the left of the hihat.

It was a challenge not only to learn the technique but also to invent it. There are no books on this subject and no drummers to learn from. But it works! Maybe one day I’ll write a book called “Gong Bass Theory” or something like that.

The possibilities are different from having two pedals. Some patterns cannot be done in the same way because the left hand also needs to play the snare drum, but there are also advantages.
I can play the hihat with my left foot while doing all the double bass notes, adding to the groove.

I wouldn’t say that this style of playing is better than two pedals, it’s just different. I like it!

When I’m not playing the drums I like to play piano, drink beer, watch movies, cook, watch sports.

Roger Federer is a big inspiration. Even for my drumming. The mental control involved is very cool.

So! Now you know everything about me. See you at the next Dynazty show!