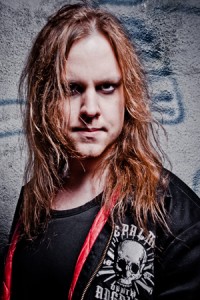 I first picked up the guitar when i was twelve years old, inspired by guitarists like Brian May, David Gilmour, Yngwie Malmsteen. Been playing music pretty intensive since then!

During the years i’ve been playing with numerous band/projects of different styles, like DE VAN, Frost, Construcdead etc.

I became a member of Dynazty in the fall 2011 after I was asked to fill in on the guitars on the UK Tour w. Electric Boys. We’d all been friends since many years and it worked out very well on the tour! Actually, my first encounter with Rob was when we were 12 years old. He was playing Black Star by Yngwie Malmsteen (very cocky) in the school corridors..
We’ve been friends and collaborated since, and the rest is history 🙂